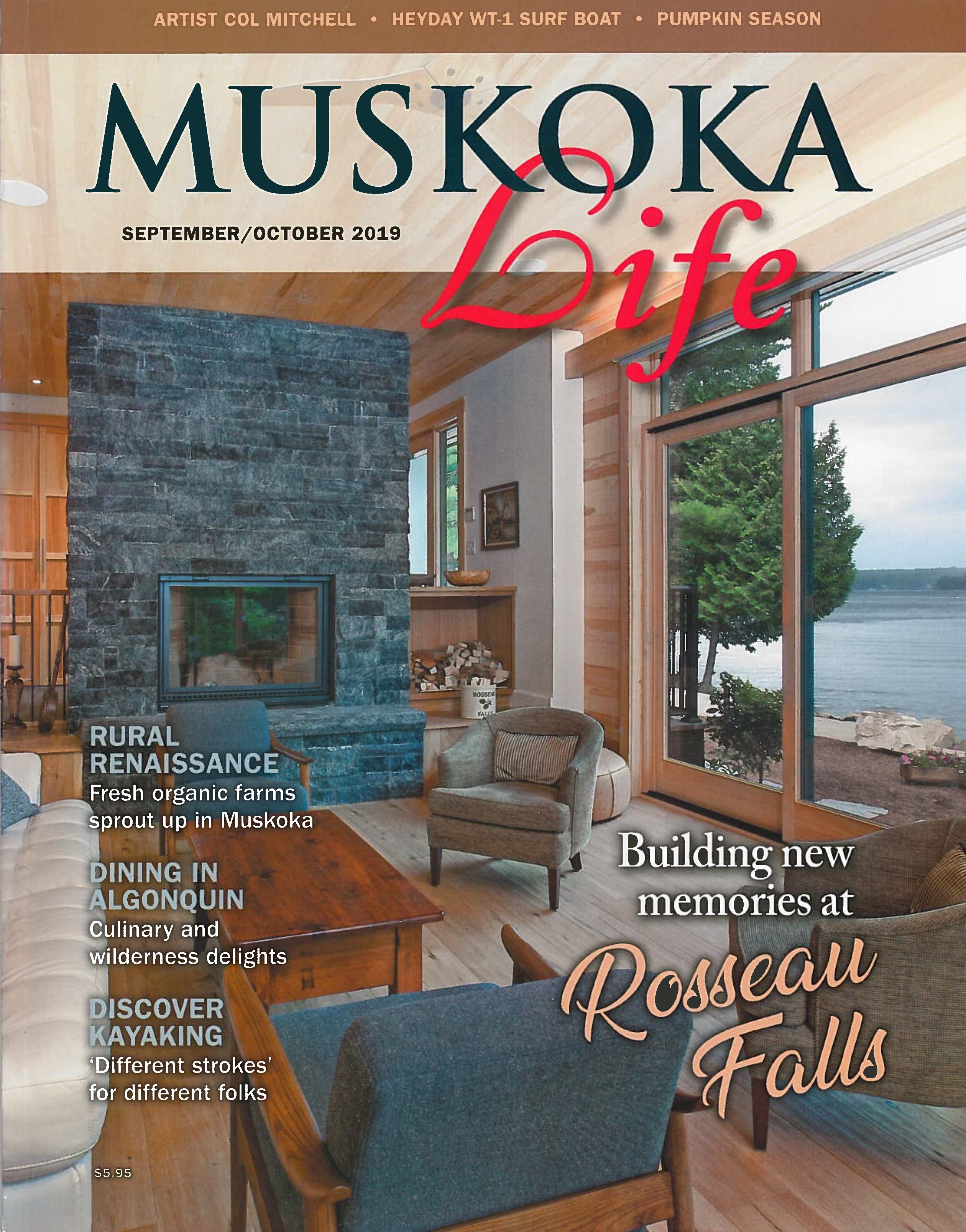 Rosseau Falls Hideaway is a Focal Point for Family

MUSKOKA LIFE — Though the contemporary wooden cottage settled comfortably near the shore of Lake Rosseau is just over a year old, it has already inherited a long family history.

“In the ‘50s, my Dad bought 40 acres with a bunkie and frontage on Lake Rosseau,” explains John Kitchen, owner of the new retreat built on the property where he and his four siblings spent childhood summers with their parents. “What we use as a bunkie today was the cottage for all seven of us. Three brothers were in one bedroom, my sister was on the couch and I was with my mom and dad. My parents enjoyed it enough to stay and build a larger cottage on the same property in 1957. In 1989, they built a bigger cottage beside Rosseau Falls. That’s where our new cottage is today.”

John and his wife, Sue, actually constructed a new cottage for the same reason as John’s parents. By 2016, the family had outgrown the old retreat. Their children were getting married and grandchildren were expected. John and Sue wanted to be sure there was enough comfortable space for everyone.

With a more modern cottage style in mind, the couple contacted Cathy Garrido, managing principal and architect at Altius Architecture Inc. The company, based in Toronto and Parry Sound, has done integrated design and construction management for 20 years.

“We wanted to go with a firm that was smaller and more personal, and could do the design as well as help with the building,” says Sue. “Our son, who is an architect, knew Altius so we decided to call them. The cottage is great. It’s not huge but is very open inside. With the 10-foot ceilings, you feel you are in a bigger space. That’s helpful because we often have our kids, grandchildren, dogs, relatives and friends here all at the same time.”

Garrido created a modern design for the west-facing cottage that would fit into the landscape. Plans included a roof overhang to shade the house from the afternoon sun and large windows that take in the lake views. The former cottage’s short windows only revealed the view if you stood right beside them.

“Our goal was to increase the windows and make it all functional,” explains Garrido. “We put the master suite on the main floor so that as the owners got older, the living space could all be on one level. Upstairs there is a big sectional couch, TV and a little stone fireplace. A big pocket door hidden behind the bookshelf separates the family room from the three bedrooms. If a child has gone to bed, the door blocks noise from TV watchers. It’s basically a kickback area for the kids.”

With the old cottage’s foundation grandfathered, the new cottage was built 35 feet from the shoreline. However, the planned second storey had to be set back 50 feet.

“Because of where the existing cottage was positioned and how we approached it, we set the second floor back and cantilevered it off the back of the cottage so we could get more space,” says Garrido. “It is set a couple of feet back towards a beautiful rock face. We wanted to keep the view, but it wasn’t a problem. There are views in every direction. That’s one more nice thing about the property.”

The couple also wanted the four-bedroom cottage to have lots of natural light. Accordingly, the house is about 30 per cent windows with many being floor to ceiling. More illumination comes from the hidden lighting that borders the clear pine ceilings. Garrido suggested both the lighting and the pine ceilings. Both were hits with the owners.

“We love to do concealed and indirect lighting whenever we can,” says Garrido. “It brightens the space and adds a nice quality without being seen. Typically, we do light valances that light the ceiling. The room is warmed by the reflection.”

The cottage was sited to have an optimum view of Rosseau Falls from its windowed sitting room at one end of the house. The same space was a screened room in the old cottage. Sliding glass doors lead to a wide wooden deck with a lakefront view. Multiple windows open to let in summer breezes off the lake.

“We love to sit in that room facing the waterfall,” says Sue. “It’s an amazing view that changes with the seasons.”

“In the spring when the water is high, the falls are unbelievable,” add Garrido. “The family wanted to keep that location the same. They spend a lot of time in there because it’s so beautiful.”

The sitting room is part of the open-concept main floor that includes the kitchen, dining area and a sunken living room with granite wood-burning fireplace and extra-wide glass doors leading out to stone steps. Wanting to avoid air conditioning, the couple felt the open doors plus a few ceiling fans would be enough to keep things cool. They were right.

The open grey-toned kitchen was purposely designed to let cooks keep up with conversations elsewhere on the main floor. A wide, walnut island with seating for three and a double sink is topped with Caesarstone. Shaker cabinetry and a walk-in pantry keep kitchen sundries, including cases of pop, out of sight.

Guests often stay in the bunkie, a.k.a. John’s former family cottage. However, the bunkie’s history goes much further back. It originally housed loggers working at the Mutchenbacker Mill in the late 1800s. Peter Mutchenbacker received a 100-acre land grant and, with a waterfall on site, started a sawmill.

“At its peak, there were about 40 people who worked there,” says John. “Rosseau Falls had a company store and a post office with Peter as the postmaster general. Having a company store was common in those days since the workers couldn’t go into town very easily. The post office operated from the 1880s to the 1930s. There are still two buildings that remain from those days. One is our sleeping cabin and the other is across the river from us. It has been rebuilt in the same style that it was back in the day.”

The 100-acre land grant included 40 acres on the cottage side of the falls and 60 acres on the other side. Remnants of the mill, including iron bars and logs, can still be found along the river’s shore. John remembers bits of sawdust and end pieces of logs appearing in the water when they were kids.

“We would have to clear out the wood from the swimming area,” he recalls. “We had a rowboat we used to fill up with wood. We’d dry it out for firewood.”

Happily, one of John’s brothers has a cottage on the same property. With the shoreline being quite flat, family members see each other down the beach during the day and gather together in late afternoon. Every year, Thanksgiving dinner duties alternate between the two households.

“One cottage does the drinks and hors d’oeuvres beforehand and the other cottage does the main meal,” says John. “It’s great because if you are doing the main meal, you don’t have everyone milling around while you’re cooking. They are all busy chatting with each other before the meal. It’s a lot of fun. We have the tradition of the kids table and other things that people remember.”

John and Sue currently have one grandchild, while John’s two brothers have 15 grandkids between them. It’s safe to assume the cottage will be filled with that next generation in the decades to come.

“Our kids grew up here and one of the first things they ask when they arrive is ‘Who else is around?’” John says with a smile.

“One hundred years ago, when we were an agrarian society, the farm was the focal point for families. It’s interesting how cottages are getting to be the focal point now. People have such an emotional attachment to cottages.”

… From the pages of Muskoka Life magazine

View our current edition, or get Muskoka Life delivered to your door. Keep up with Muskoka region news and events by liking us on Facebook. 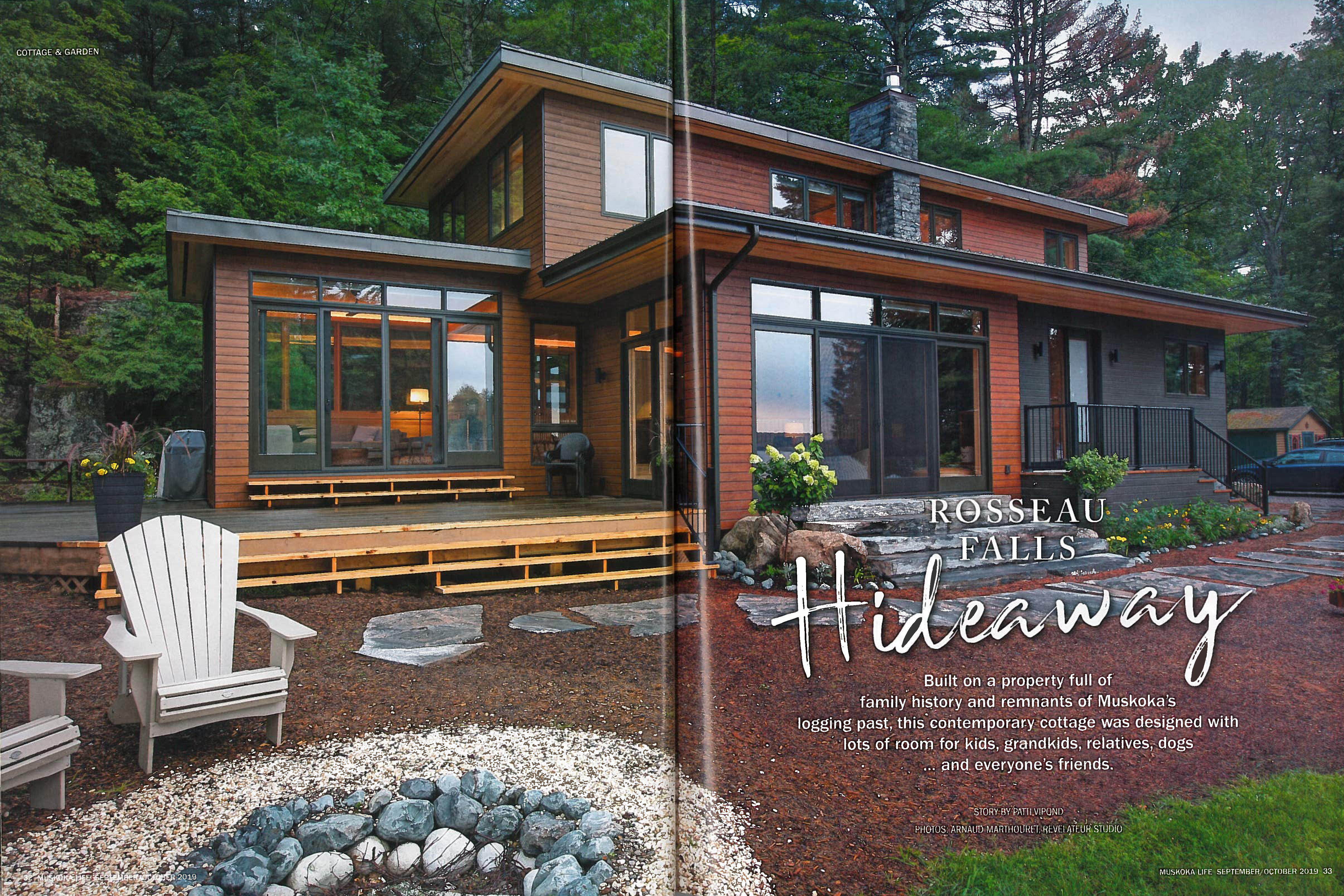 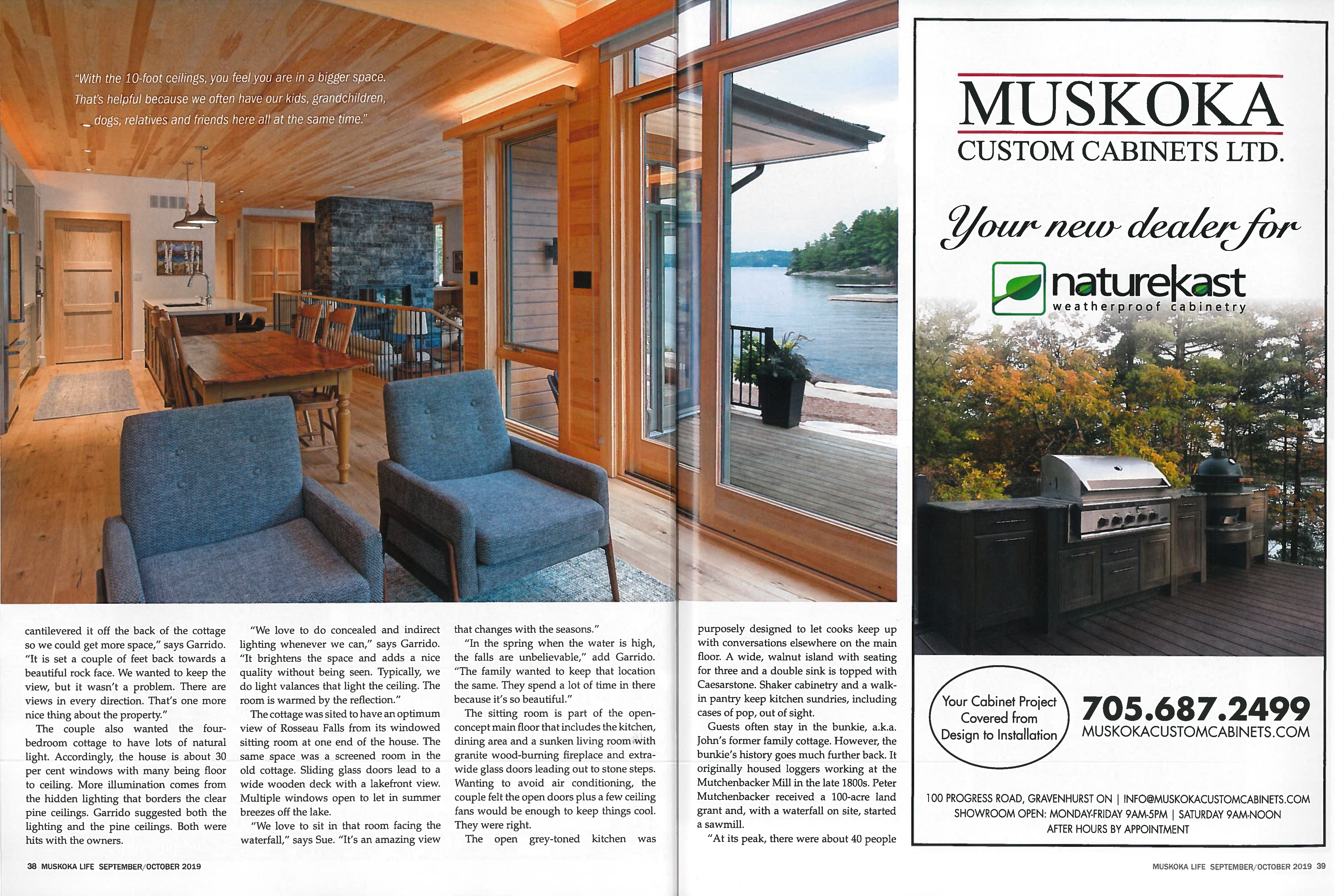 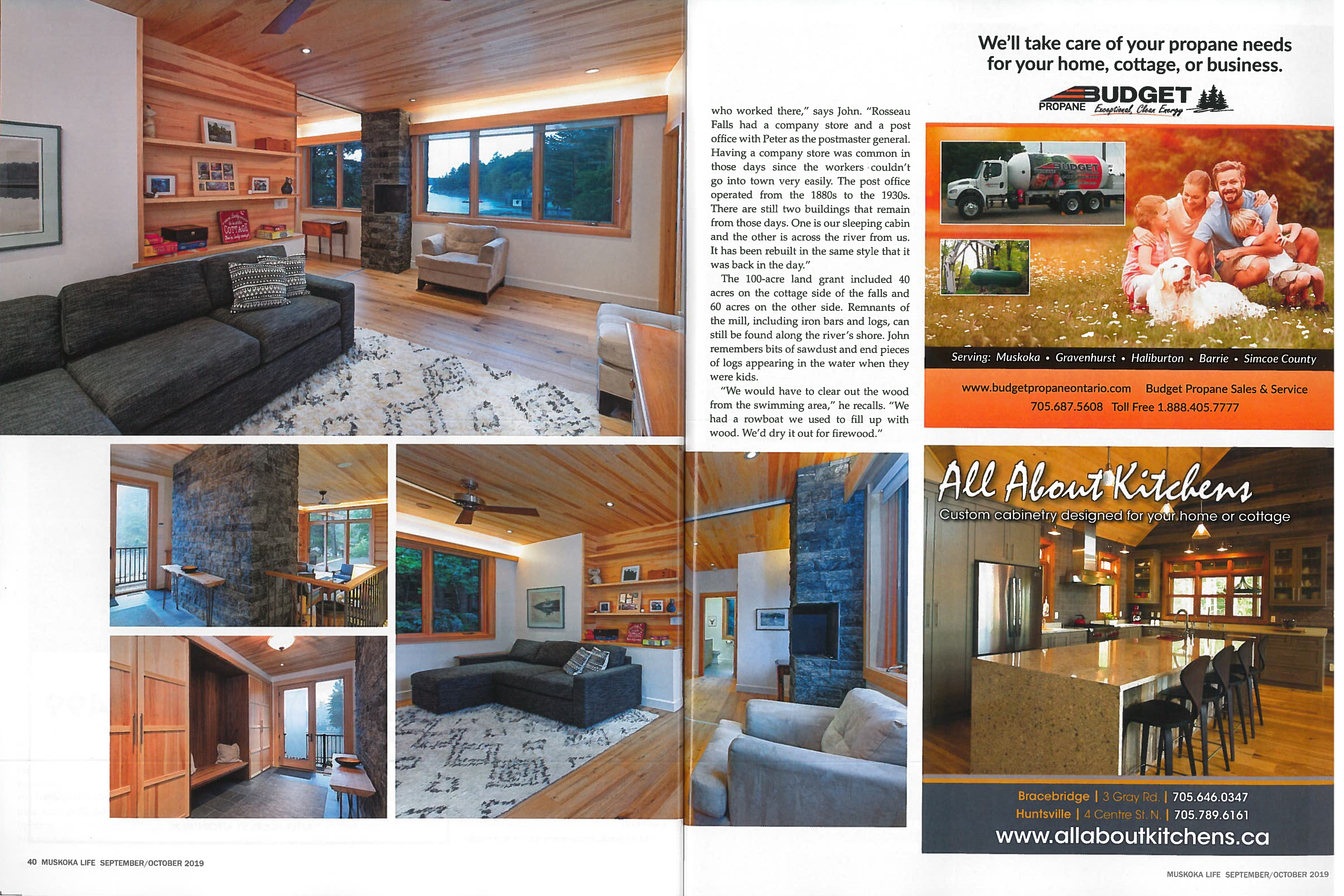 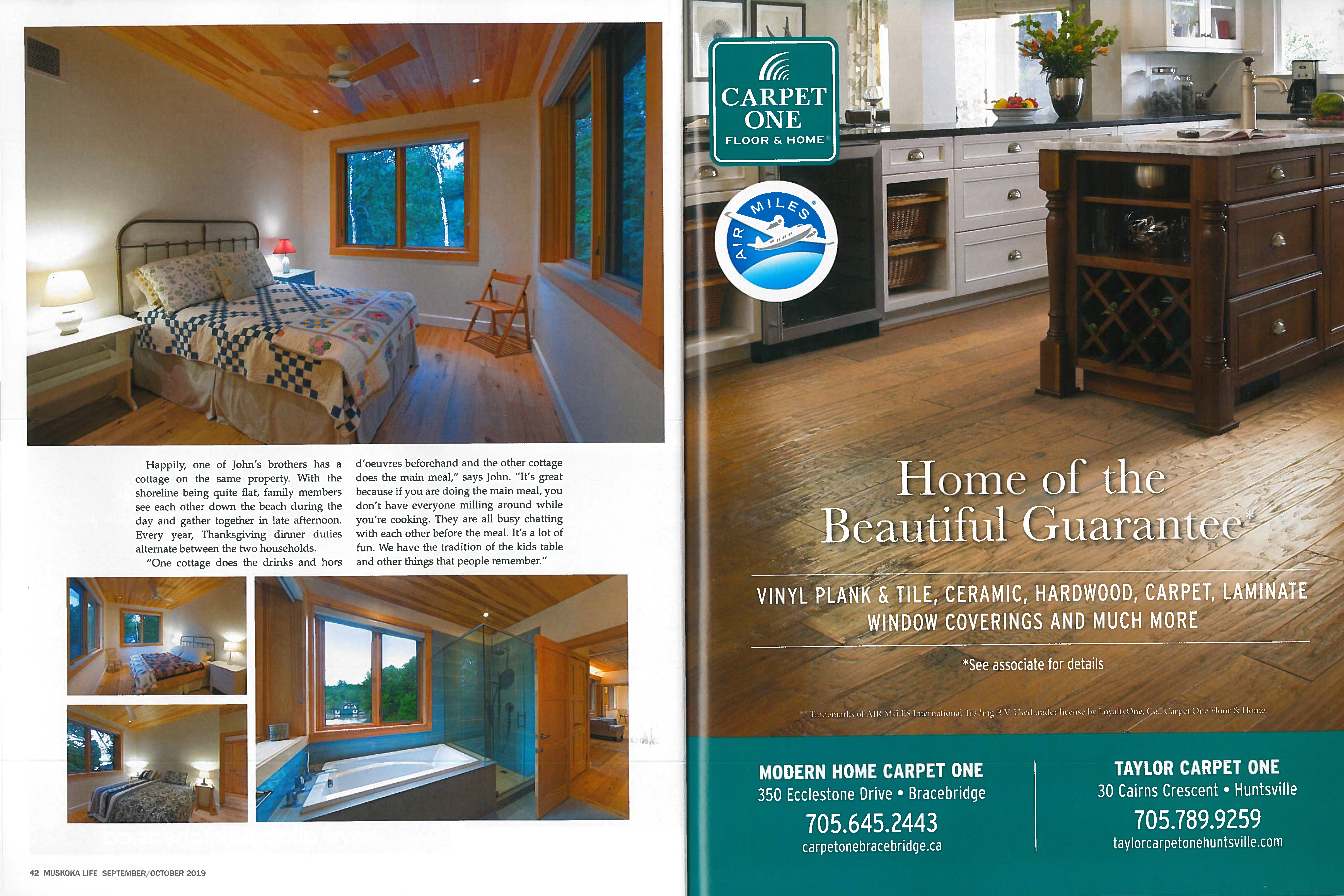