Altius Featured in The Toronto Star

A million-dollar Etobicoke home reno, designed from the outside in
By Heather Hudson
Fri., Aug. 16, 2019

Tory Crowder and Shawn Thomas are not indoor people.

The couple and their three children spend most of their time in the backyard swimming, entertaining, relaxing, eating and sharing family time — their outdoor space is a home, cottage, playground and lounge all in one cosy spot.

So when it came time to update their 1950s-era Etobicoke home, they started the way they live: from the outside in.

“From the very beginning of even thinking about a renovation, we were really focused on how we were going to live outside,” said Crowder, 42, proprietor of Jump Start Communications, a PR firm.

“We’re not like other people who want a big huge house and worry about landscaping later. We were very much thinking about the pool and outdoor space first, then the house.”

THEN: Their old ccoffin-shaped pool “wasn’t conducive to indoor/outdoor livinng and that’s what we really wanted,” says Crowder.

She and Thomas, 45, bought the three-bedroom, two-bathroom, 2,100-square-foot house in 2008 for $820,000, just a year before they started their family. It came with a “coffin-shaped” pool, which was the butt of a few jokes since they live nearby to Park Lawn Cemetery.

NOW: The new poolhouse includes a space Crowder uses as her office through the week.

As the kids grew out of infancy, they realized the value of having a pool in the backyard — even though it wasn’t exactly a luxurious model. “It was an old vinyl pool and the slides slanted in, but it was really good for young kids because they never had to swim more than two metres to get to the sides,” said Crowder.

THEN: The couple’s house, bought before their children arrived, included a dated, closed-in kitchen that restricted entertaining and didn’t allow a view of the backyard.

Meanwhile, the house was gradually deteriorating around them. They turned on the bathtub with vice grips and there were a few holes in the walls through which they could wiggle their fingers straight through to the outside. With no main floor bathroom, the kids would leave puddles in their wake as they scrambled up or downstairs straight from the pool. And the closed-in kitchen prevented them from keeping an eye on the action in the backyard.

“It wasn’t conducive to indoor/outdoor living and that’s what we really wanted. We loved the pool and entertaining, and we wanted something that would work continuously together and put a huge focus on the backyard,” said Crowder.

NOW: The black kitchen, designed in scrach-resistant nanotechnology, includes kid-friendly flip-up cabinets and drawers, and stands out against the pale maple hardwood floor.

They began consulting with architects to discuss new plans. Over time, they realized there wasn’t much of a difference in price between a renovation and a complete teardown. They chose Altius to complete the design for a more modern house with a flat roof and an open concept. And, of course, a brand new pool, yard, deck and poolhouse out back.

Permits for the new pool were the first hurdle, thanks to a cluster of historic black walnut trees in their neighbours’ lawns. “Our entire backyard is tree protected. We were faced with a Catch-22: we weren’t allowed to touch our old pool, but we couldn’t put in a new pool either because we were not allowed to dig within a certain number of metres of these trees,” said Crowder.

It took a lot of tweaking, including shrinking the pool slightly and agreeing to tear the house down first and install the new pool second so heavy equipment didn’t disturb the trees. But within a year, the permits were in place.

The family of five moved to a rental house two kilometres south of the construction site when the renovation began in March, 2017. They came home in May, 2018. Landscaping the backyard continued throughout the fall and into the spring of this year, making this the first summer they’ve enjoyed the new saltwater, concrete pool — a 40-by-10-foot rectangle that sees a lot of action — designed and installed by BonaVista.

To see the article online at the Toronto Star: 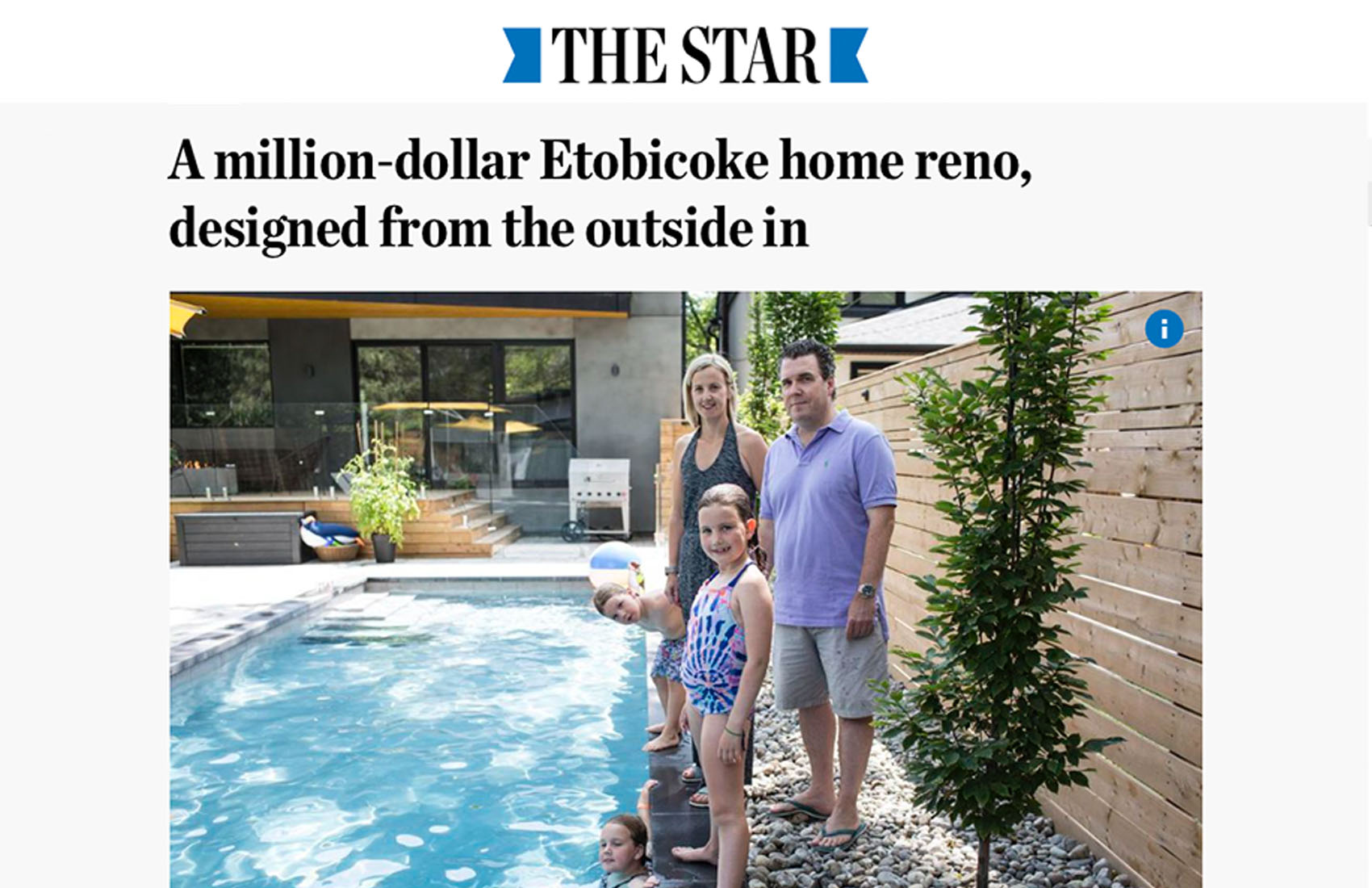