Relaxing in the great room of this serene contemporary home, nestled in the hills just outside King City, it’s hard to imagine it wasn’t always this way. But in fact, when the owners first came across the house a couple of years ago, it was quite — well, different. 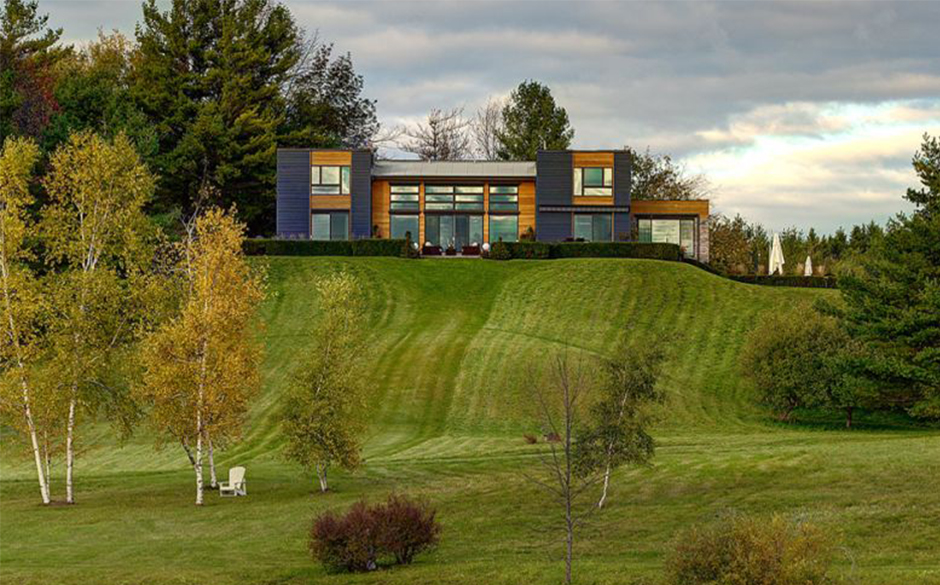 “I think the previous owners were involved in theatre, and it was a bit like a stage set,” the wife says with a laugh. Every surface, from floor to ceiling — and in some cases, floors and ceilings too — had been elaborately decorated with trompe l’oeil and faux finishes: faux marble and marquetry, painted architraves above doorways, murals of Classical landscapes. It was a Cecil B. DeMille vision of Pompeii, and actually, the current owners allow, quite fun. But they knew, even before they called in Graham Smith of Altius Architecture, that there was a lot of work ahead.

The couple — an author and political philosopher, and a former sports champion originally from Vancouver — had been looking to downsize to something a little more manageable than the century hobby farm where they’d raised their five children. With 10 grandchildren (and counting, they say) who frequently visit, they had to be able to accommodate a house full of active guests, but they wanted it to be just as comfortable and cosy when it was just the two of them. Nature lovers, hikers and skiers, they wanted a close connection, visually and physically, with the landscape. And they wanted the design to reflect something of the wife’s Western heritage. 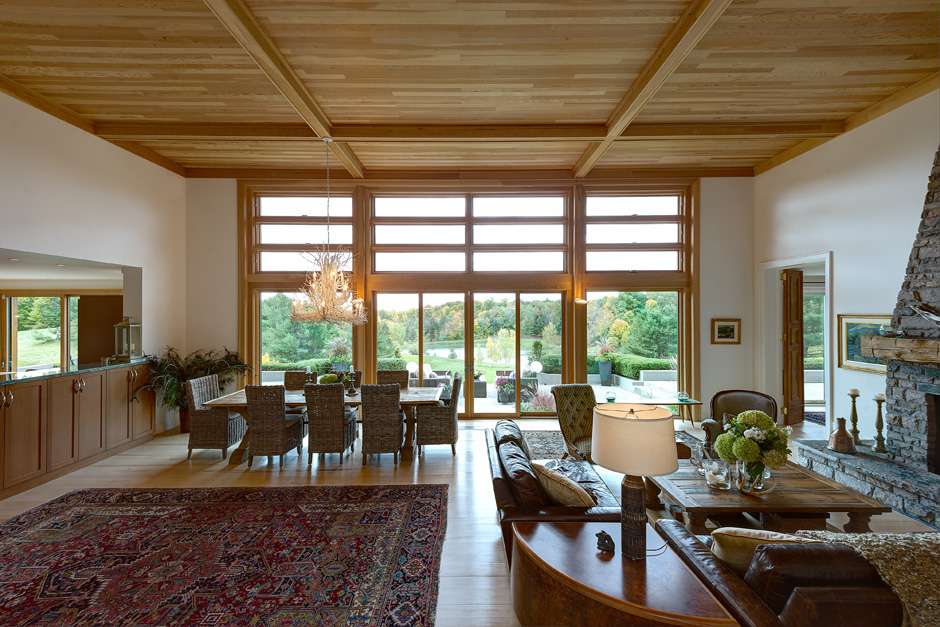 Recalling his first encounter with the house, Mr. Smith isn’t quite as diplomatic, perhaps because as a professional, he could see more serious problems with the circa-1980 house beyond its quirky esthetics. “The layout was all wrong, especially for a house that size,” he says. “It was a big drywall cube, with no relation to the view. And it had a lot of structural issues that are typical of a lot of ’80s houses, such as crumbling stucco and leaky windows. We debated for a long time whether to just tear it down and build anew, or just extensively renovate.”

The first problem was the front elevation. Other than a cheery coat of bright terra cotta paint, the original façade was almost completely featureless; it looked more like the back of a shopping mall than a family home. It didn’t even have windows. Working with Rob Crysdale of Landcare, Mr. Smith created a path to the front door by installing a limestone front stoop set on an angle, leading up to a low wall of straight-sawn Muskoka granite sheltering a shallow stone courtyard, under an entrance canopy supported on steel posts. The stone illustrates a theme that carries through the design as a whole: deploying rustic materials in a slightly more formal way, such as the square layment of the stone. “They didn’t want it to look too cottagey,” Mr. Smith says. 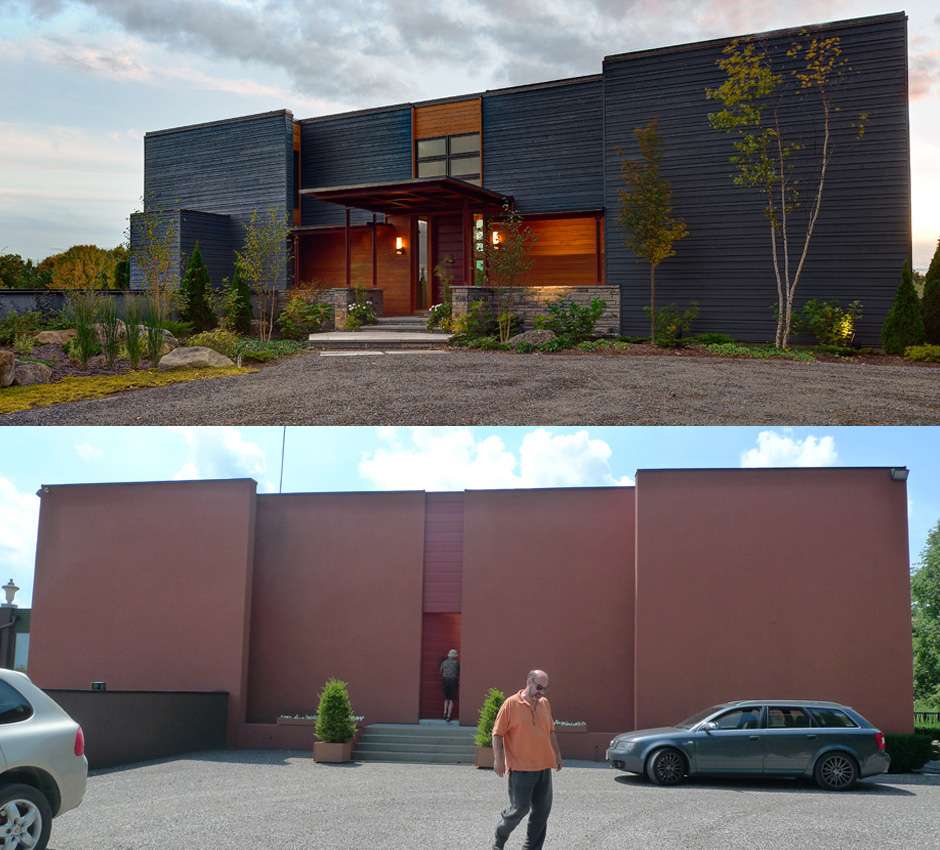 Terra cotta stucco gave way to horizontally laid fir siding, stained dark blue above the canopy line and left its natural tan colour below. (A more complex composition of alternating blue and tan wood was installed on the other three elevations, adding variety to the home’s rectangular silhouette.) Tall, narrow windows at the edge of each of the two wings face the front door on each side; standing in this spot, it’s almost as if the house has its arms ready in greeting. 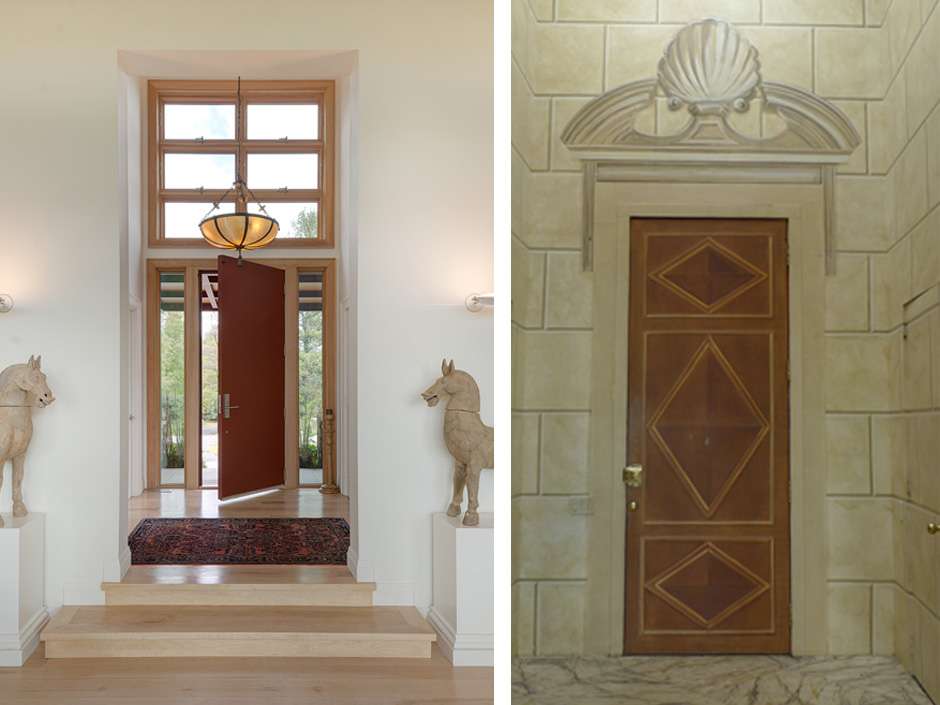 As you enter, you’re immediately struck by the view of rolling hills and woods framed by the entire back wall of the great room. The view is seen in large or small measure from virtually every room in the house, but here, it’s at its most compelling: a wide vista of snowy hills etched with cross-country trails (a favourite winter pastime for the husband, in particular). In summer, the pond takes up the centre of the view, and in fall, the whole house seems ablaze with colour.

In deference to that operatic view, the design is calm and low-key, with white walls and simple, natural embellishments: a hearth of Muskoka granite that tapers to the ceiling, with a mantel made from a barn beam brought from the old house; and high above, a coffered ceiling of natural fir planks, which adds warmth to this big room. 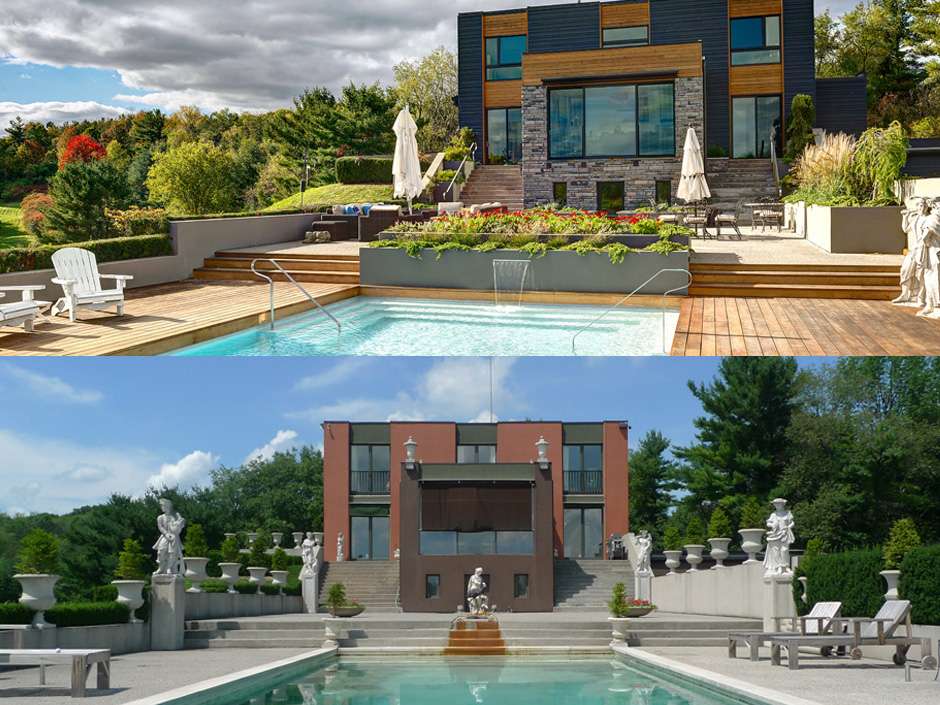 It’s a perfect backdrop for a lifetime collection of unpretentious furnishings and family pieces and artwork, some of it by the couple’s son, a developer and artist. “Everything was chosen mainly for its ability to stand up to grandchildren as well as its history,” says the wife, pointing out a handsome pine trestle table that has been in the husband’s family for years. But there are some charming new pieces as well, such as the unusual chandelier over the dining table, a frothy concoction of white-painted twigs.

“I had seen it hanging in the lighting store for months, and I always really liked it, but I knew it would have to go into just the right kind of setting,” says Mr. Smith, who found it for the house. “In a city home, it would just look silly, and in a country home it would have been too clichéd. But it was perfect here.” Neither too rustic nor too edgy, it strikes a perfect chord against a backdrop of bare trees and snow.

The owners speculate that the kitchen wing had originally been designed for caterers rather than family, since the kitchen itself was marooned at the back of the house, far from the action. The first job was to knock out the wall dividing this area from the rest of the house, and relocate the kitchen to directly face the great room. Reconfiguring this wing allowed them to also put in a sunroom overlooking the pool, and a whole new direction from which to enjoy the view.

On the other side is a ramble of guest rooms that seem to lead one into another, perfect for corralling multiple grandkids. “It’s important to have rooms that feel open and connected to each other, but it’s at least equally important to have a sense of privacy and separation, so you don’t always feel you’re on top of each other,” Mr. Smith says. 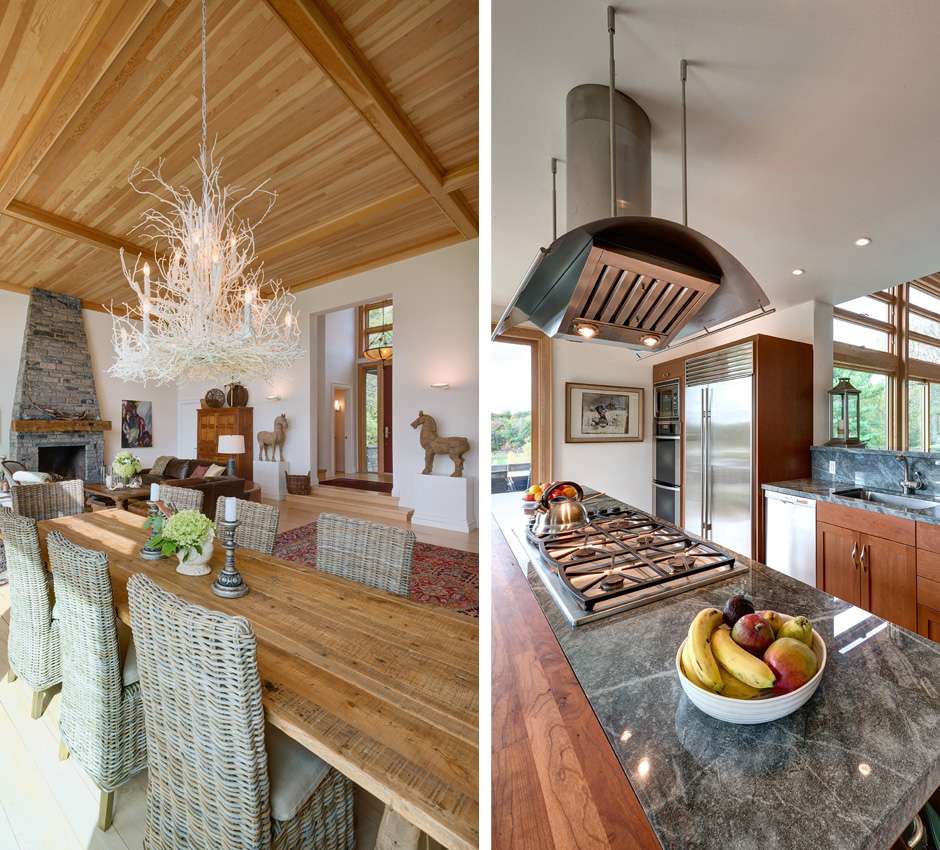 The master suite is set off by a separate doorway directly off the great room, with a walkout to a private deck and another view. Except for the expansive bathroom and dressing area, the master bedroom is surprisingly modest in scale. “We didn’t want a huge bedroom. It’s like a little nest; it’s a great place to retreat to, even when the house is full of people,” the owners say.

Mr. Smith acknowledges that one aspect of the home’s former life is still there, in spirit at least. It reminds him of the ancient villas in the hills above Florence, with their open-air rooms and hilltop views. But it’s also very much a family home.

“We love the feeling of being in nature, even when you’re inside,” the husband says. “Our kids were very attached to the old house, and we were afraid they wouldn’t like it here as much. But they have made themselves right at home.”

Check out the article by clicking here.